Six Suspects is a murder mystery novel written by Vikas Swarup, an Indian diplomat. He is well known for his debut novel Q & A which has been made into Academy Award winning film Slumdog Millionaire. I have read this novel around 9 months before. It is just yesterday I’ve got the mood and time to write my opinion about Six Suspects. Actually I am running out of movies in my hard disk, and I don’t know what else to do in the little leisure time I get.!! 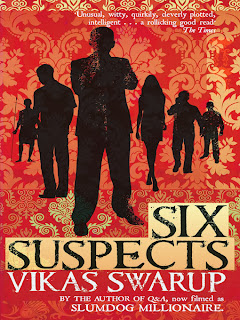 A suspect is someone who is accused of a crime. Here we have six different suspects as the title suggests and the crime they are accused of is a murder. It is a high profile murder occurred at the capital city of India and the victim, Vivek ‘Vicky’ Rai happened to be the son of U.P home minister. Vicky throws a party in his farmhouse in Delhi to celebrate his acquittal from a murder case which he did before 7 years. That’s where he was killed. Inside the farm there found six individuals, each one with a revolver in their possession and indeed with a motive that is enough to kill Vicky Rai.

Let’s see the suspects one by one.

What is interesting about the novel is the way it is presented to the readers. The characterization of each suspect is superb and narrated cleverly. After the prologue, each character is introduced through a back story, their motives to carry out the task, i.e., the murder of Vicky Rai and the evidences in separate chapters .Though all the characters are etched out in a neat manner, the part of the actress and the politician are outstanding. The politician's dark and dirty games in order to attain the throne is superbly written. Others are also good except 'the American' part which I find damn boring. He could've been cut out from the novel and title can be changed to Five Suspects!!

Another interesting aspect about the novel is, many events in the story are derived from real life incidents. The case for which Vicky Rai was acquitted is based on Jessica Lal murder case. Other events like driving over the platform killing homeless people, hunting deer and other protected species from forests are also based on real life events. I don’t know their real life counterparts though. The novel also parallels the Indian political scenario, the corrupt politicians and bureaucrats, the way they operate for their benefits, the industrialists who run the government by bribing the ministers and so on. Being a diplomat, the author would not have much difficulty in expressing these things.

Apart from these aspects, the novel has nothing special to call it a great piece of work. Its like a commercial movie. No wonder if it is made into a movie in the future. By the time I started reading it, I was told that it was murder mystery novel. That’s the first reason I chose to read it. When we read a mystery novel, we know that at the end the mystery will be revealed. The revelation should be shocking enough to make you speechless. Unfortunately here the revelation is not much shocking, or at least for me it was not. I felt that, as the end is approaching, I found the plot getting convoluted. Nevertheless, this could be read for its distinctive style of narration and the real life inspirations. If you are an avid reader, and likes mystery and investigative genres, Six Suspects will keep you engaged and I could say you won’t throw it away in the halfway of reading.

Previously I have posted a few trivia about English films. Not only they are fascinating. Trivia from our own regional language films are also good to know. Here are some of them listed below. Happy reading..!!

Bala succeeded in shooting a scene in the 2007 Ardha Kumbh Mela without anyone's knowledge for his film Naan Kadavul.

Andha naal is the first Tamil-language film without song sequences.

The ring-tone in Abhishek's mobile 'Aye Handsome' in the film Jhoom Bharabar Jhoom is voice of his wife and actress Aishwarya Rai Bachchan!!!

Some of the parade scenes in the film Dil Se were shot during the celebrations of the 50th anniversary of India's independence.

Most of the young actors who appeared in the film Salaam Bombay! were actual street children.

The role of Shekar in the Maniratnam film Bumbai was initially offered to Cameraman Rajiv Menon but he turned it down. By the way, don't they look same? !!

The producers and director of the film Kamasutra: A tale of love bribed the Indian authorities “protection money” to avoid prosecution, when they became aware of the content of the film. Before that the film was shot under a different name.

The slaughter house scenes in Gangs of Wasseypur were actually shot in a slaughter house in Allahabad. The back story of Sultan Qureshi is told as a fearsome butcher who at the age of 12 could slaughter and skin 1 buffalo in a single day. Similarly, Sultan in the contemporary time scale of the film could cut 60 buffaloes in a day. Both of these were developed on seeing a boy and man doing it.

When Aparajito won Golden Lion award at Venice film festival, its director Satyajit Ray was utterly flabbergasted as he felt that the film had some serious flaws. It is the first Indian film to win the Golden Lion at the Venice Film Festival.

Former France president Francois Mitterrand personally went to Satyajit Ray’s home in Calcutta to present him with the The Legion of Honor, the most prestigious award in France, instead of inviting him to France for the award ceremony.

Prince Charles served as a clapper boy for some of the scenes while on a visit to the set of Mangal Pandey – The Rising.

Here are the links for my other trivia..
Trivia I
Trivia II
Academy Award Trivia

IN TYLER I TRUST 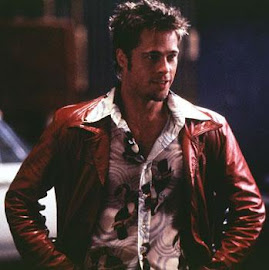 READ IN YOUR PREFERRED LANGUAGE

I DON'T MISS TO READ THESE